The test sites were selected in South and North geographical region.

SERV_FORFIRE Joint Activities will take place in  Pilot Areas which have been selected by the partners as more appropriate for this action.

A template has been created and filled in by the partners for the Pilot Areas which includes information about the responsible partner, the proposed activities, the availability and characteristics of the data sets and  descriptive information, necessary for the organization of common activities.

The first version of the completed Pilot Areas Templates are presented below:

The pilot area selected is located in eastern Finland and has a large amount of information available on the vegetation with 20 m spatial resolution. The data is produced with laser scanning technique.

There has not been major forest fire registered in the area.

Additional information is available on wind damage occurred in the area.

The seasonal fire risk outlooks will be first tested with the stakeholders on the pilot area; following the tests those will be extended for the whole Finland. 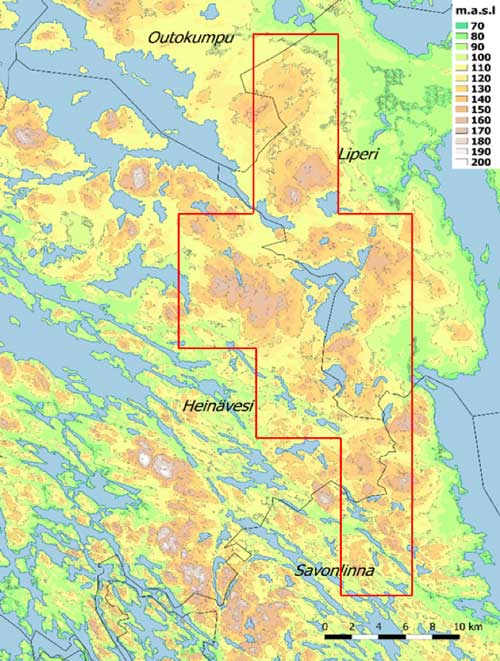 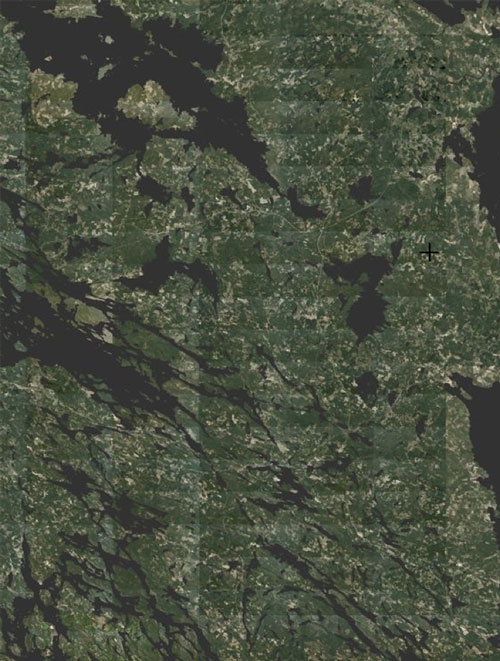 Attika region includes the cities of Athens and Piraeus and is characterized by a relatively complex terrain. The urban area (Athens basin) is surrounded by mountains on the three sides, while on the fourth side there is a major opening to the sea in the southwest (the Saronic Gulf). The three main mountains are Hymettus (1050 m) to the East, Penteli (1100 m) to the North and Parnitha (1400 m) to the North. These mountains with only small gaps between them along with numerous hills located downtown Athens play an important role on the modification of the flow in the area. The Korinthian Gulf (to the west of Athens basin) is surrounded by high mountains both to the north and to the south, which under specific conditions can result in a channeling of the flow towards the Saronic Gulf. The study area selected for SERV_FORFIRE Joint Activities is the eastern part of Attika which includes Hymettus and Penteli mountains.

During the last 30 years the study area has been under rapid urban development and in many cases this urban expansion remains unplanned. Based on demographic data for the eastern Attica region a significant increase in the population of the area at the main settlements has been recorded. The increase in Pikermi community is estimated at 419% from 1971 to 2007, while the increase in the population of Drafi and Rafina communities, for the period between 1971 and 2001, is estimated at 79% and 38% respectively. Furthermore, large scale public works are being constructed in the area especially during the last decade and this has contributed to a significant increase in the private building activity. These works include the construction of the new national airport of Athens in Spata, the construction of major roads, such as the Attiki highway, which connect the southeast Attiki area with the rest of the Prefecture and the business centre of Athens, and the developing Rafina port. During the last 15 years the northern part of the area has experienced large scale forest fires, including the ones of 1995, 1998 and 2009, which apart form the ecological degradation of the region, resulted in the progressive conversion of large forest areas to burnt land.

As a result of the extensive wildfires the affected area is at a great extent vulnerable to post-fire events including floods and erosion. 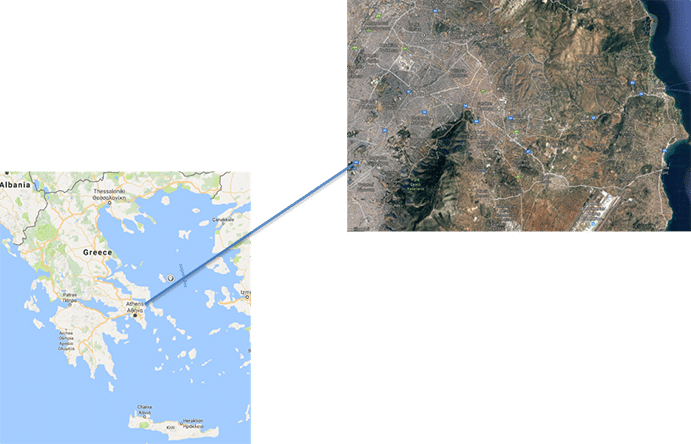 It is located in the South of Italy and borders on Puglia to the north and east, Campania to the west and Calabria to the south having short south-western coastline on the Tyrrhenian Sea and a longer one to the southeast on the Ionian Sea. Basilicata has two provinces: Potenza and Matera. The regional capital is the city of Potenza. It covers 9,992 km² and is one of the most sparsely populated regions of Italy (approximately 587.517 inhabitants)

It is a mountainous region with around 47% of its area covered by mountains, 45% is hilly and finally 8% is made up of plains. The climate is variable and strongly influenced by three coastlines (Adriatic, Ionian and Tyrrhenian) as well as by the complexity of the region’s physical features. Basilicata

The climate is continental in the mountains and Mediterranean along the coasts. Approximately 35% of the total surface is covered with forest vegetation (mainly Oak woods, Beech woods, Mediterranean maquis, Mixed broadleaf and/or coniferous woods, Mediterranean scrubs). Prairies, bushes and cultivated soil cover approximately 45% of the territory. Between 2001 and 2008 in Basilicata region fire affected more than 20.000 ha (forest and non-forest) with 1900 fires generally less than  to 10 ha.

Several national and regional parks are located in the Basilicata : the Pollino National Park, the Gallipoli Cognato Regional Park, the Lucanian Dolomites and the Natural History and Archaeological Park of Murgia, close toMatera and listed in the UNESCO site along with the SASSI (form both cultural and natural outstanding recognized heritage).

As a result of the extensive wildfires the affected area is at a great extent vulnerable to post-fire events including floods and erosion.

In particular the Analysis of extreme eventsasoccurred in summer 2017 in the Basilicata Region. 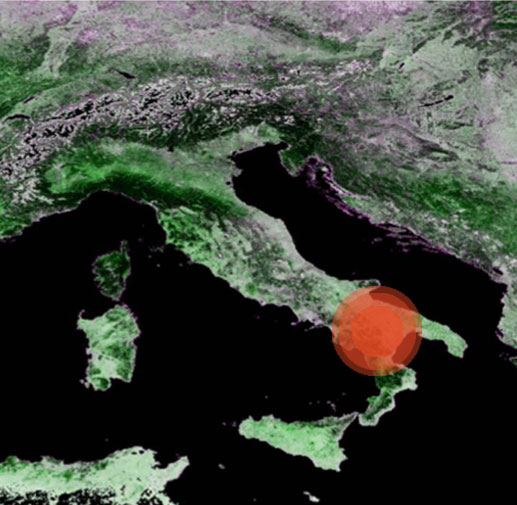 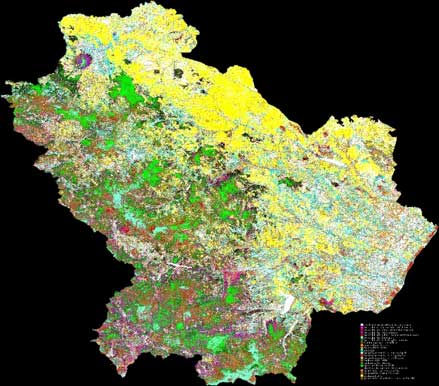 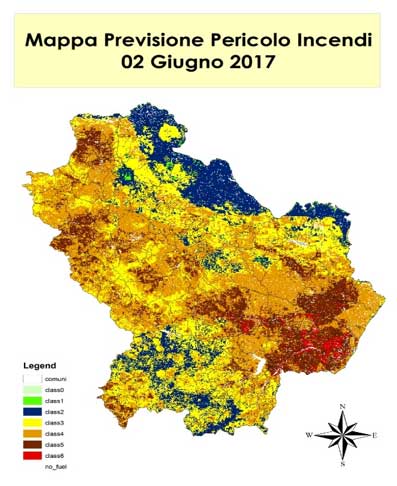 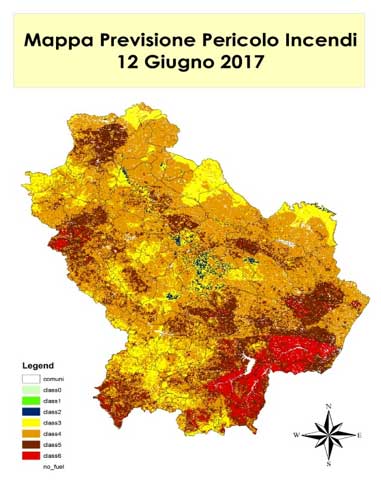 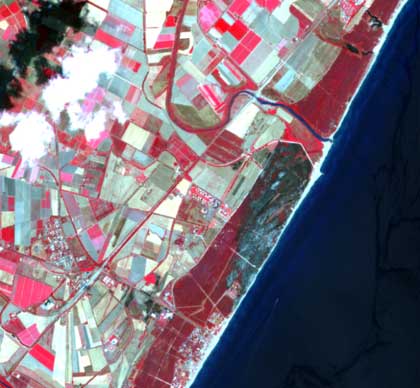 For the whole Basilicata Region (South of Italy)  that is characterized by small fires and a significantly high  hydrological risk (one of the highest in Europe) CNR-IMAA will:

perform statistical analysis  on the fire catalogues available for the region since 1998,

carry out the future fire occurrence projections that will be made focusing on the interface fires (urban-forest  vegetated areas),fragmented ecosystems and mountain regions, with particular reference to the Pollino national park recently listed in the UNESCO Geopark (2016).

Perform simulations at local spatial level of wild fire behaviour under various different climatic scenarios using both FIRESA tools (developed by researchers of IMAA) and FIRESITE (developed by the USA USGS). This will support the study of the fire behaviour parameters/maps.

Estimation of changes in vegetation status will be made using different climatic scenarios and long term weather forecasts (weekly, monthly and seasonal).

Several well recognized satellite derived indicators will be adopted.Remote sensing data acquired from MODIS, LandSatTM ; Sentinel 1 and 2  will be also used for the development of ad hoc vegetation indices for the monitoring of landscape changes during post-fire restoration.

Integration with social factors and evaluation of economic damage will be performed. 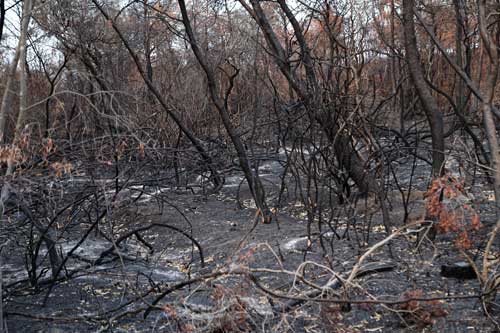 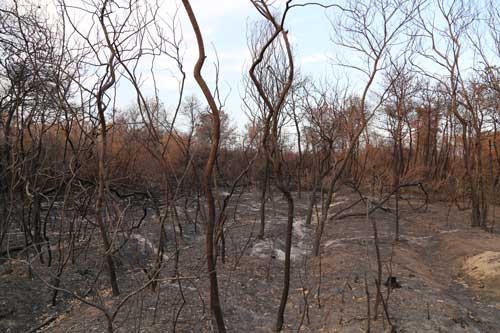 Tuscany is a geographically complex region of central Italy (Figure 1),with half of its territory covered by forests, and characterized by a rainfall regime influenced by latitude,distance from the sea and orography, and ranging from about 600 mm in the southern coastal area,to 2700–2800 mm in the northern part of the Apennines (reaching a height of almost 2000 m a.s.l.). 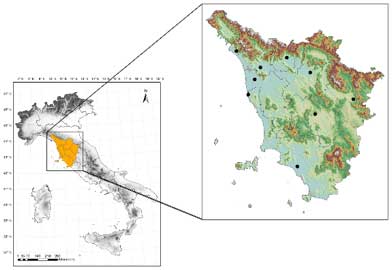 The pilot area includes the whole territory of the Czech Republic approximately 78,000 sq. km with

About 50% share of agricultural land and 34% of the forested areas. 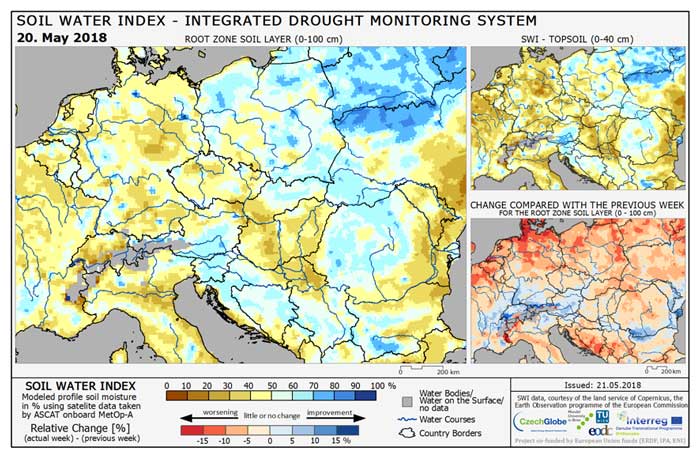 This site uses cookies. By continuing to browse the site, you are agreeing to our use of cookies.

If you do not want that we track your visit to our site you can disable tracking in your browser here: